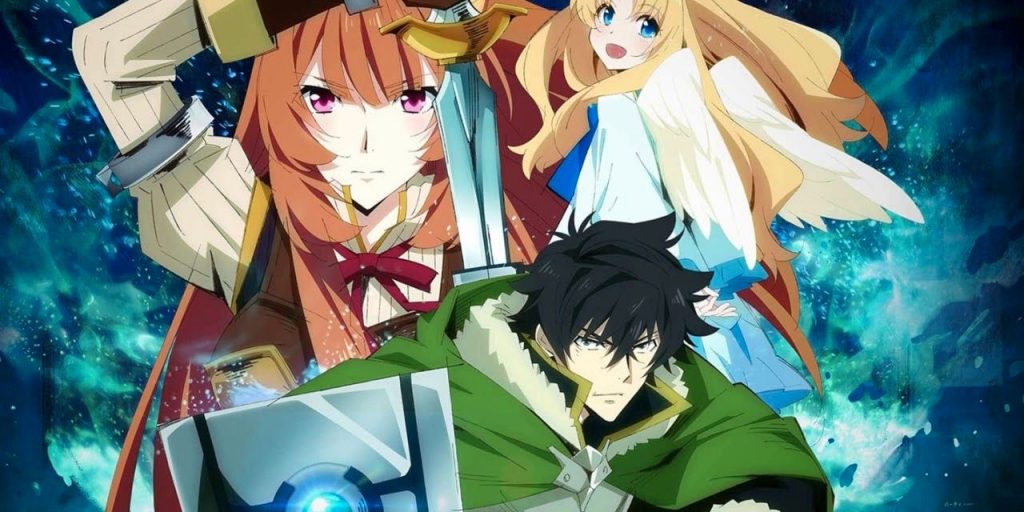 9 Of The Best Anime Like Rising of The Shield Hero

The Four Cardinal Heroes are four ordinary men from modern-day Japan summoned to the kingdom of Melromarc. The country is plagued by waves that have brought disaster for centuries and these heroes were given a sword, shield, spear or bow to vanquish it. Naofumi Iwatani was an otaku who became cursed with having the fate of being the Shield Hero. Dismayed and downtrodden, Naofumi is ridiculed by his fellow heroes and the kingdom’s people due to his weak offensive capabilities. He feels powerless when faced with their attacks as he can only defend himself using a measly shield.

Naofumi was not happy when he discovered that the only person willing to train with him is Malty Melromarc. He soon found out, however, she had betrayed his trust too causing him   take advantage of her.

The people of Melromarc hated Naofumi for something he didn’t do. The storm raged in his heart as they began to discriminate against him and hurt him. Naofumi sets out on his own but quickly realizes that he’s getting nowhere. He never had any friends to train with before and no one would believe him when he tries to tell them what happened, so Naofumi is left feeling alone in this new world.

Further along, however, the diffiy of being on his own sets in so Naofumi buys a demi-human slave who had spent her entire life fighting for survival. Raphtalia’s skills and abilities are unmatched by any he has seen before which makes her an invaluable companion to have when venturing into dangerous territory.

An isekai anime series, The Rising of the Shield Hero has a great story, great character development, and an interesting world that will keep you intrigued from start to finish.

If you’re hungry for more parallel world theme adventures, sword and magic, or just looking for a good story line, here are our anime recommendations similar to Rising of The Shield Hero:

9. Arifureta: From Commonplace to World’s Strongest (2019)

‘Arifureta: From Commonplace to World’s Strongest is similar to “The Rising of The Shield Hero. Both protagonists get transported into a fantasy-game world and start with no power or ridicule from other people, but they end up becoming powerful in their new worlds.

Hajime Nagumo had an ordinary life of playing video games and watching anime until he was summoned to the world. When his classmates were given cool abilities, Hajime felt like a loser because all he got was the power of transmutation.

When Hajime was betrayed by his group, he found himself plummeting to the bottom of an abyss. With no way out in sight and monsters looming overhead, it seemed like there would be nothing but misery for this unlucky high schooler.

Desperate to live and return home one day, he resolves to fight for his survival. Meeting an imprisoned vampire he names Yue who was also seeking a way out, Hajime is determined not to be defeated by any obstacle before them. Taking interest in him, Yuw as well as others along the journey set off with Hajime on his quest to find a way back home getting stronger bit by bit, along the way.

8. Cautious Hero: The Hero Is Overpowered but Overly Cautious (2019)

A funny take on overpowered protagonists tasked to save an alternate reality. Seiya Ryuuguuin was anything but carefree. After being summoned by the goddess Ristarte to save Gaeabrande from destruction, his heroic journey began with a few days of training and preparations. It took him much longer than it would have taken others because he knew how easy it is for someone like himself who has overpowered stats to get injured during this endeavour—and worse yet, lose one’s life in battle before even reaching their destination! What is there to do in a world where the forces of evil dominate each and every expectation? That’s when his attitude becomes essential! You know, if you want to be safe.

That Time I Got Reincarnated as a Slime is one of the best anime out there. It’s entertaining, has an amazing cast of characters, visually appealing and quite fun to watch!

Satoru Mikami was just your average corporate worker and a robber took his life. Before succumbing to his stab wound, he hears an odd computer like voice that announces things he does not understand.

He wakes up in a different world as a goop of slime with the ability to consume, replicate and assimilate the characteristics of anything.

Check Out: 30 Animes Like That Time I Got Reincarnated As A Slime

Like Rising of The Shield Hero, this isekai anime the dark and nasty side of human. But instead of the people being antagonistic to the hero, our overpowered protagonist antagonizes the residents of his new world and even mocks the god that brought him there and granted him a second life.

Tanya Degurechaff is a cute girl renowned for her ruthlessness. She’s also got an uncanny tactical aptitude, earning the name Devil of Rhine from some people on account of it. However, underneath that small frame is the soul of a man pushed in front of an oncoming train to meet his and the self-proclaimed God he called Being X.

Tanya had been the nether regionbent on defiance and she was determined to be the best soldier her country ever saw, but with so many people vying for a position in their military, it doesn’t seem like much of an accomplishment. Only being X stood in the way of recreating the peaceful life she once had. But her actions had unseen side effects; she was unknowingly propelling the Empire to being the most powerful military force in human history.

Just like the shield hero Naofumi, the main character was transported to a parallel world of sword and magic. Our hero in this story also starts off weak and ignorant and slowly gains experience and learns the secrets of his power. This anime also touches on dark psychological themes like the Rising of the Shield Hero.

After leaving a convenience store, Subaru Natsuki finds himself in a parallel world. Not long after being transported, he is attacked by some thugs and he loses the fight fairly quickly. Luckily, a beautiful girl by the name of Satella saves him. To thank her Subaru help her find the person who stole her insignia. As soon as they find the thief, they are both instantly killed.

Subaru wakes up to find himself hours before their with everything he witnessed happening again. Having the chance to redo the events multiple times. The only catch is, he has to lose one’s life to go back.

Who knew could be so funny? Kazuma Satou is a normal high school student. One day while returning home after buying a game he loses his life a pathetic . Though instead of facing the conventional “heaven-hell” judgment day, Kazuma was given two choices by the beautiful goddess Aqua.

He was given a choice between going to heaven or reincarnate into a parallel world. Of course, Kazuma chooses to reincarnate, and to aid him in this new world, he may choose any item to take with him. Our hero chooses the goddess herself not knowing that this obnoxious goddess is totally useless!

Our hero is tasked to vanquish the demon lord but before they can set off into that adventure, they have to figure out a way to earn money for their daily needs.

Check Out: 17 Anime To Watch If You Love Konosuba

In Grimgar, the protagonist is a young person who has no recollection of their past and with little knowledge about what brought them to this world. In order to survive in this fantasy world, they are required to have a job as there is only one type offered- military service. The weaker ones who were left out of the city decided to stay together and survive this harsh world. ‘Grimgar: Ashes and Illusions’ is an anime that revolves around these individuals, telling their tale as they try to find a way back into society with no guarantee it will be successful.

Momonga had been playing Yggdrasil for years. After the servers were shut down, he was still there, waiting to be logged out of his account. He finds himself as his avatar and that the non-player characters now have personalities and act on their own accord. wanting to find a way back or at least see if there are other players trapped in this game-like world, he takes the name of Ainz Ooal Gown and shows his tremendous power in hopes that if there are any players here, they would recognize his power.

A fun and unique take on the isekai genre, this isekai anime explores the scenario where our protagonist is not a school student, but an adult that enjoys his favorite virtual reality game.

No Game No Life’ is one of the most entertaining isekai anime out there. It’s visually appealing due to its wonderful art and animation, but what sets it apart from other shows about people who are transported into a new world? Well for starters, these two siblings Sora and Shiro have an incredible talent in video games that has made their username Blank legendary status! But when they find themselves thrown into another game-like reality after accepting a challenge via email (that turned out to be more than just challenging), this wacky adventure will finally test all those gaming skills.

This is one of the most interesting worlds I’ve ever seen. This world has a fascinating ure and everything revolves around games- including how disputes are solved! The duo would need to unite all the factions on this world and challenge Tet, the God of this world.

Check Out: 19 Anime Like No Game No Life You Need To Watch Today

And there you have it, anime community! Our list of isekai anime recommendations similar to Rising of the Shield Hero. Did we forget any of your favorite fantasy worlds?

Check out these anime, too, they may be a bit off from Rising of The Shield Hero, but they’re great isekai anime, too:

PrevPrevious12 of the Best Anime Created by Mappa Studio, According to My Anime List
Next25 of The Most Visually Stunning Anime Like Jujutsu KaisenNext