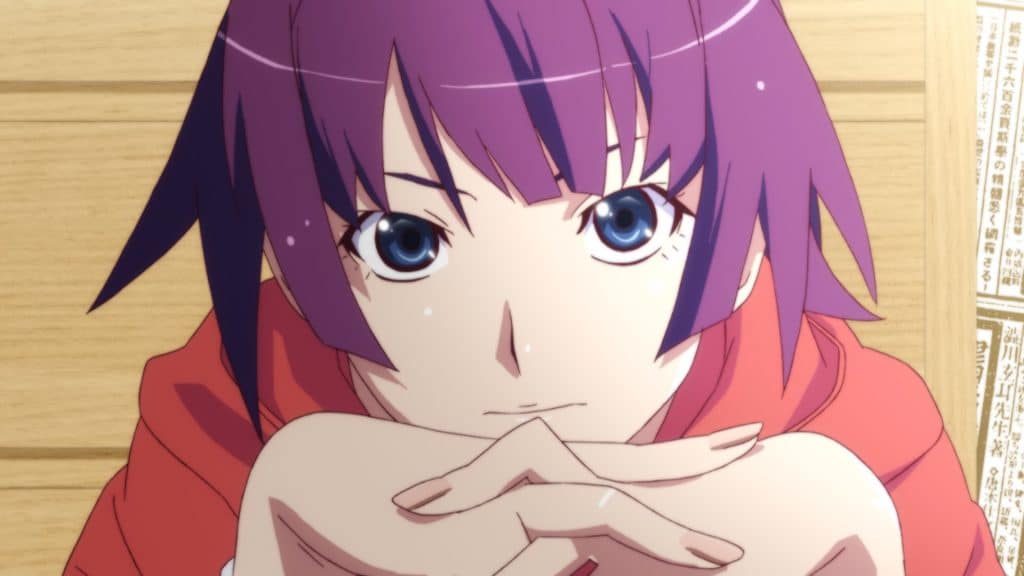 The perfect anime girl could have any hair colors: pink hair or brown hair, or white, but chances are she has purple hair. Variety makes life better in this crazy world. Purple hair is a color that can be anywhere along the spectrum from close to white to darker than black. It’s often reserved for anime characters who have had dark histories but whose hearts are not entirely darkened, yet sometimes it just looks good!

Are you looking for that one anime girl with purple hair you once saw in an anime series? But with the amount of anime you watched, you probably forgot which anime series. Don’t worry, fam, I got you. Here are 10 of the most interesting female anime characters with purple hair:

As a sci-fi anime series enthusiast, I’m not surprised that robots are better at taking the life of than humans. Robots like Ritsu; who starts off as a big hunk of metal with an adorable lilac haired screen saver and eventually evolves into a more compact form while also getting severely nerfed, so she can’t really fight anymore, but her role in class is to support the other classmates by being their E-Girl mascot!

Check Out:  14 Must Watch Anime If You Like Assassination Classroom

The “legends never die” character, Yuuki, even though she had a terminal illness, refused to bow down. She won countless duels against Kirito in the virtual world and made a name for herself as an excellent duelist. But what’s most impressive about Yuuki? Her mental strength-at only 13 years old, but with so few days left on this earth, she lived life like there was no tomorrow, helping out many people who were also suffering from their own diffi circumstances.

For most of her life, Izumi was an assassin with a grim future. She did whatever she could to survive and protect those that matter the most in her world. What’s more, is how well she plays these parts – it seems as though this will be all too easy for such a little girl! It also helps that she has such lovable personality traits; watching someone give care and attention to Izumi after doing so much on behalf of others makes even the grumpiest person feel warm inside.

What’s better than a cute little ghoul girl who follows around our protagonist, cackling and cracking jokes? A merciless one that sends shivers down your spine just by hearing her name.

Kae was always a chubby girl, but these days she’s the babe of school. Her transformation came from grieving an anime character, and her heart still pumps otaku blood through her veins. The best part: she’s a fujoshi. Mention something about any anime-related thing, and it gives her a super Saiyan powerup!

Dorothy is the captain of Clover Kingdom’s Coral Peacock squad and a member of The Magic Knights. She’s mostly asleep, but she has an outgoing personality with Dream Magic that can trap her foes in “Glamour World”, where anything Dorothy thinks about becomes a reality–a dream come true for any girl!

Nana struggles with a life of aggression , but in another world, she would be free to enjoy her youth. The little horns that are the mark of an unavoidable destiny peek out from Nana’s purple hair and make for a cute look until you realize it’s inevitable they’ll bring about more bloodshed.

Night Raid member Sheele has two sides to her personality as a compassionate and caring person or a ruthless taker of lives. Her kindness can be seen through giving other people, especially those in need of emotional support when they are down on their luck, but don’t let this fool you because she can turn into a psychopath. She is also very clumsy, but it’s weird that with giant scissors in the hands of this clumsy girl, her fingers are still attached, but yours may not.

She has the most billowy purple-black hair, the kind that sways in a breeze – the nonexistent breeze. The girl with serious eyes and an intimidating aura might look like she isn’t all too friendly but rest assured, Yuuko is just as cheerful and amiable as they come – for a ghost.

There’s more to Haqua than her long purple hair. That cloud-like cloth that she wears around the neck is as much of an eye-catcher, especially since it can turn into anything. She’s proud and would rather lose everything before asking someone for help.

That’s top 10 purple haired girls, but this wouldn’t be a guide if it ends here. Check out the rest of the list of popular anime characters with purple coloured hair. Let us know in the comments if we missed your favorite anime character.

Road loves every type of candy and blood, not to mention the way it’s so excited for any kind of birthday-related themes.

She can transform into a cat form and human form at will and on several occasions, directly in front of Ichigo, just to see his reaction.

She is timid and doesn’t cook well, though she is good with other household chores. Ryou’s predictions are always incredibly specific but skewed or wrong more often than not.

She encounters Umaru in her “indoor” form and wants to serve her and call her Master, thinking it was Umarus cute sister.

The icy beauty with a sweet tooth: the yuki-onna, who is in the same homeroom class as Tsukune and Moka, frequently seen in striped everything clutching her lollipop.

17. Saeko Busujima – Highschool of the Dead

She was the president of her school’s kendo club, and she had close combat skills and deadly with a bokken that sent anime fans hearts’ a flutter.

A member of the Magic Council who apparently works for Siegrain.

Sumire was trained by her father, Tanuki, from a young age to avenge Danzou Shimura.

The human form of Purple Sister is a very shy girl who will over-apologize for even the tiniest of things.

A cat with strong magical powers often flirts with Soul to see how Maka reacts.

An Etherious of the Dark Guild Tartarus and the Ninefallen angel Gates.

Lelouch’s half-sister and the second princess of the Britannian Imperial Family.

24. Frederica Berkanstel – Umineko: When They Cry

A skilled martial artist that does not possess the Dragon’s Eye like her siblings, she wields the cursed sword: Reiki.

I’m not sure what’s more impressive, the fact that this girl can plug her earlobes into objects or the explosive power of her heartbeat.

“You were there for me; you saved me, much like what today; you asked me out on a date and showed me how nice this world is.”

Kagami is the stereotypical tsukkomi character, but she sometimes gets shy. In other words, this girl’s a real “tsundere” type personality!

The Servant of Shinji: silent and sultry with a hint of vigilance to keep her Master from harm.

Easily bored, competitive, and extremely ill-tempered; she believes brute force and coercion is the best path to get her way. Yet this aggressive character is also very ticklish.

In the top ten for all subject in standardized exam results throughout the whole country; plays the violin, but she’s terrible at it.

She is so shy she avoids talking to people or looking at them directly; communicates to the team by way of instant messaging.

She has anterograde amnesia: she cannot remember anything past thirteen hours previous.

36. Kyou Goshouin – And You Thought There Is Never a Girl Online?

The time loop is a unique period of existence, and she’s the only one who has lived through it for hundreds of years.

40. Shinoa Hiiragi – Seraph of the End

The daughter of a world-famous sweets company

42. Motoko Kusanagi – Ghost in the Shell

Officially registered as a Super Wizard Class Hacker, cyborg Major Kusanagi prefers to use the body of a beautiful girl in her twenties despite being at least sixty years old.

She isn’t good at studying or sports but excels in cooking.

An officer who is committed to the job, but not so much when she’s off-duty. She has a soft spot for the teenage mecha pilots under her care.

A well-rounded member of the bounty hunting crew, brash, egotistical, and quite lazy, despite taking her time to pamper and care for her own appearance.

Kaiju fan; the most popular girl in the school;

Self-proclaimed mysterious girl; unhelpful troublemaker who gets yelled at by others

A mature and independent girl from the Land of Sea

Oda’s soldier, who is very proficient in using a traditional Japanese spear, uses tiger skin as a hat.

She is responsible for the eternally repeating June 1983, a time loop to save Rika from losing her life.

Often seen expressionless, mysterious, and incomprehensible, always carrying a recorder, yet she is friendly and affectionate.

the ambassador of the Werebeast race in Disboard

Check Out:  19 Anime Like No Game No Life You Need To Watch Today

She is often seen as strange when she punishes her peers in odd ways.

With a very outgoing and exhibitionist personality, she once offered to be intimate with Iori to get him over his anxiety of sleeping next to Nanaka during the Okinawa trip.

“Grim Reaper”; a grave keeper that acts cold and emotionless despite being very caring with a bright personality

The shovel wielding tomboy member of the School Life Club, calm and caring of the other girls she often acts as Yuuri’s confidante.

PrevPrevious12 Anime Like the Disastrous Life of Saiki K.
Next15 of The Best Josei Anime that Any Anime Lovers Should WatchNext