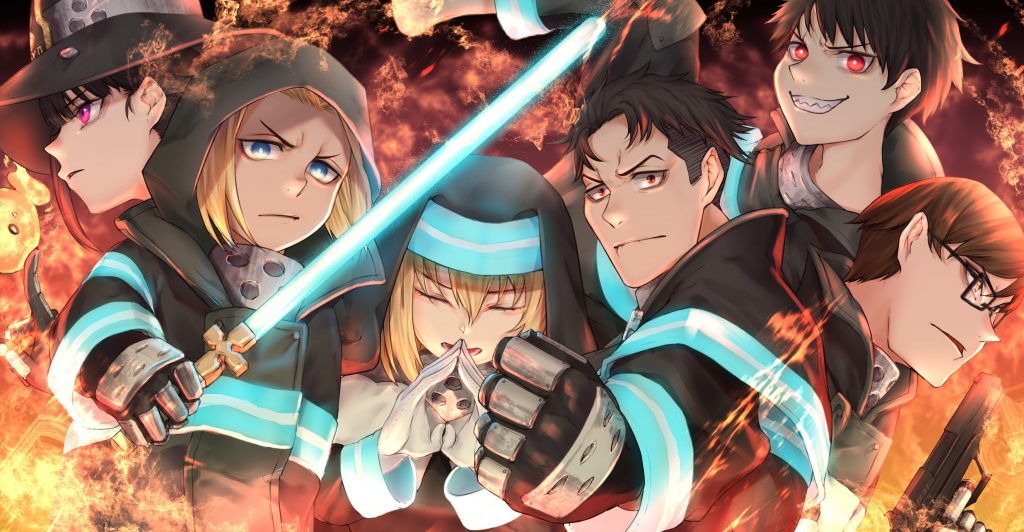 The show Fire Force is a shounen-action anime that was released during the powerful summer 2019 season. It takes place in a world where new causes of have been discovered: Human Combustion, turning humans into supernatural fire creatures known as Infernals. Kusakabe Shinra has the power to manipulate flames at his feet and fights for humanity with fellow firefighters like him who are called Enforcers.

Kusakabe Shinra does all he can to put the infernals to rest, searching for clues of his brother who has been missing. He once thought that his brother was no longer living but now is not so sure what happened. If you are looking for anime similar in tone and theme as Fire Force, then we know a few suggestions!

Blue Exorcist is a supernatural –shounen anime series that has many similarities to the series Fire Force. Both main characters, Rin Okumura and Shinra Kusakabe share similar traits: they both feel like they have something to prove because of their family’s history. They also want to protect people from demons; however, in Blue Exorcist, it follows protagonist Rin trying his best to live on his own while being an exorcist just as he trains with other children at True Cross Academy, where he learns how to fight against devils.

Check Out: 25 of The Most Visually Stunning Anime Like Jujutsu Kaisen

Fire Force fits the unofficial mould of “monster hunter” anime. The lead characters use special abilities and weapons to find and slay beasts of all kinds, whether actual monsters, demons, spirits or robots. D-Gray Man is certainly like that with action scenes from cool fantasy in its many episodes.

Allen Walker is a young, handsome exorcist with an attitude. He lives in the gothic late-1800s world where Akuma sporadically emerge from people and Millennium Earl and the Noah family that is trying to remake the world – it’s up to him and his fellow exorcists to stop them!

Bleach is not your typical shonen title. It’s more of a monster hunter –shonen anime, where we hunt Hollows or spirits and the exanimate. High school student Ichigo Kurosaki meets Rukia Kuchiki -a soul reaper-, who becomes his partner in kicking these monsters’ asses!

Ichigo and his friends fight all kinds of evil, from hungry hollows to the cruel laws of Soul Society. The series also introduces the Wandenreich empire led by a ruthless archer: Quincy.

Soul Eater is an anime with some similarities to Fire Force, such as character design and Shinra Kusakabe’s iconic smile. Both Soul Eater and Fire force have a supernatural enemy-Shinigami in Soul eater vs Infernals for fire force. They both must protect their worlds from threats while training to become stronger. And both were created by Atsushi Ohkubo; as such, some characteristics of memorable characters from both series may have glaring similarities.

The series dates back to 1996 and was publicized for quite some time, meaning there are a lot of adventures that can be had. This is another “monster hunter” anime set in the 1500s Japan where modern high school student Kagome Higurashi falls into an enchanted well only to find herself transported to this period in which she finds herself as part of her own story with Inuyasha’s group battling evil forces all around them.

With a touch of isekai elements, Kagome is a ray of hope in a war-torn, fallen angel-haunted Japan. She fights back against the villainous Naraku with InuYasha’s help, while other heroes fight for her cause as well.

Check Out: 9 Of The Best Anime InuYasha

Goblin Slayer is one of the most action-packed anime out there. It has a total of 12 episodes, and it’s not for kids! The hero of Goblin Slayer is a tight-lipped knight who goes by the name, and goblins are his only enemy. But he’s not alone anymore since priestess Selda, an archer Coral, and more soon join him to form a proper party.

Demon Slayer is afallen angel hunter -shonen anime series that shares similarities with Fire Force as both have a dark theme. Infallen angel Slayer, it’s bloodthirsty demons roaming the lands, while in Fire Force, its Infernals causing . Tanjirou Kamado wants to save people from Demons after Nezuko, his sister, was attacked by one, and Shinra Kusakabe wants to fight Infernals for revenge of his sibling too; they each have their own challenges in the fight against different types of demons.

Check Out: 11 Of The Best Anime Likefallen angel Slayer: Kimetsu No Yaiba

When you’re looking for something a little more intense to watch, a good place to start is Tokyo Ghoul. In this grim world where scary creatures of the night prey on humans, Ken Kaneki fights off these monsters in order to protect those who are hapless against them by using their magical powers known as kagune. It’s just like Kusakabe Shinra fighting Infernals but without any censorship about it! There’s also an interesting moral conflict going on because some of the ghouls were relatively innocent even though others hunted innocents right alongside vicious kin.

3. Seraph Of The End: Vampire Reign

My Hero Academia is a super power -shounen anime. My Hero Academia follows Midoriya Izuku on his quest to be the number one hero in both worlds, where people with powers exist and fight for what they believe in. Both Midoriya Izuku, aka Deku, from My Heroes Academy and Kusakabe Shinra from Fire Force are kindhearted individuals who want nothing more than to save their world by becoming heroes like All Might: a man that fought valiantly until he became too old before passing down “One For All” as his legacy so future generations may have hope of defeating evil forces. All though Fire Force has a darker theme than My Hero Academia; this anime has over the top fight scenes with supernatural abilities.

The film shares glaring similarities with Fire Force as both take place in a world where supernatural fire creatures appear. In Promare, they’re called Burnish, and the team of fire fighters are called Burning Rescue that also must put them to rest, but instead of fire-based abilities, the protagonist uses mecha.

There are a lot of shonen anime out there with hybrid protagonists and supernatural elements. We might have missed them, or they just didn’t have enough similarities to Fire Force, but we’re always looking for new recommendations! If you’ve seen any that look like this series, please leave your pick in the comments below. I want to know what other people think about these types of anime and whether it’s worth watching if you love Fire Force. Let me know what you think too!